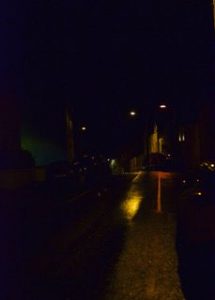 These photos were taken on the evening of December 25th 2021 (using a Nikon D7000 with a 50mm lens f1.8 ISO 800 and shutter speed of 1/250 of a second), a year which had started with a diagnoses of a malignant tumour in my throat. By Christmas I had completed an intensive plan of chemotherapy, radiotherapy and from February until November had lived with a trachea tube inserted in my neck and throat to avoid any swelling causing breathing difficulties. I was not the same person that had started the year either psychologically and certainly not physically due to scarring and swelling on my neck and having lost 30kg in weight. The photos reflect the feeling of detachment I felt during my treatment and the sense of darkness that was enveloping my life at the time. I have also tried to create a sense of the surreal which I certainly felt that all this was happening to someone else; that although there were regular day to day events that were familiar, I was feeling uneasy and unfamiliar. The absence of people emphasise the sense of isolation and loneliness that an illness such as cancer can bringThe use of shadow in the photos help establish the sense that there is something lurking in the dark places as I was always aware that although the treatment was and has been successful, there was still an element of risk that the cancer would spread. Christmas for me has always been a time of joy as I allowed my inner child to come out to play. The Christmas of the photos however is different. I was a changed person. I had certainly embraced the darkness through out the preceding 12 months and my world view had changed. There is a ghost like quality, that I am a disembodied entity silently moving through the deserted street, unseen. When one becomes so ill there is a sense of being between life and death, not quite in one realm or the other.